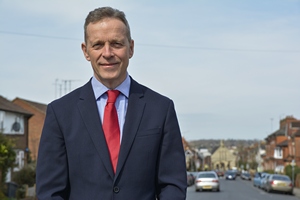 In an amicable cross-party debate on the issue of Global Road Deaths brought to Westminster Hall by Labour MP for Huddersfield Mr Barry Sheerman, Reading East’s Labour MP and Shadow Minister for Local Transport Matt Rodda sought to challenge the Government on the lack of promised funding on road safety, and the ditching of road safety targets.

He opened his contribution to the debate by congratulating the honourable Member for Huddersfield in securing the important debate, remarking on Mr Sheerman’s impressive track record in road safety campaigning for many years. Matt continued, commenting that according to the World Health Organisation there are around 1.3 million road deaths globally, and more than 50 million injuries. With an estimated 3.7 road traffic deaths per 100,000 people in the UK, this country has a proud record of some of the safest roads in the world; safer even that Sweden.

Matt continued to challenge the debate, saying that as a country we must strive to be even better. He said:
“I am pleased that the last Labour Government supported global road safety. In 2009, Labour pledged to donate £1.5 million each year from the Department for International Development to a global road safety facility. However, under this Government, progress has somewhat stalled. The 2010-2015 coalition originally scrapped our 2009 pledge, before being forced into a U-turn by the International Development Committee in 2011. In our 2017 manifesto, we said that a future Labour Government will reset the UK’s road safety vision and ambitiously strive for a transport network with zero deaths, reintroducing road safety targets and setting out bold measures that will continuously improve road safety standards.

“I ask the Minister why the Government scrapped the road safety targets that were introduced by Labour. The Government talk about road safety being a top priority, but Ministers have failed to reduce the number of those seriously injured or killed on our roads.”

Labour’s MP for Poplar and Limehouse, Jim Fitzpatrick also chimed in, saying:
“We had a 30-year consensus on the reduction of deaths and serious injuries on roads, starting with the Conservative Administration in the ’80s under Mrs Thatcher – I think the honourable Member for Worthing West (Sir Peter Bottomley) was Road Safety Minister at the time. Does my honourable Friend agree that it is very disappointing that the coalition Government moved away from targets? Does he hope, like I do, that the present Conservative Government would restore the targets that they started 40 years ago?”

Matt replied, stating that he hoped the Minister would consider the points raised by the honourable Member for Poplar and Limehouse. He continued:
“He (Mr Fitzpatrick) did not mention the reductions in the police, but I should add that there is a link to that as well. I hope the Government will also reconsider their cuts to the police service.

“It is worth bearing in mind that the road injury statistics are rising. A Department for Transport statistical table for the year to September 2017 showed that serious road injuries had increased by 7%. We should focus on that point and seek consensus.

As I mentioned earlier, the Minister should seriously look at the UK taking a leading role in promoting road safety globally. What discussions has the Minister had with colleagues in the Department for International Development about global road safety? I also believe, in addition to domestic consensus, that there should be consensus between Departments. We should seek to work with our international partners.”

In summing up, Matt rounded off his contribution to the debate stating that although the UK has one of the safest road networks in the world, there was no room for complacency. He further added that the Government should be doing much more to make the country’s roads even safer, and looked forward to hearing the Minister’s comments on some of the important points raised in the debate.