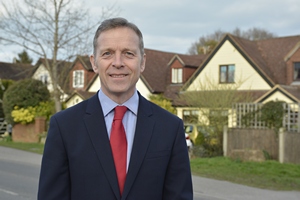 READING EAST MP Matt Rodda contributed to a recent debate in Westminster Hall which referred to the Local Authority Financial Sustainability National Audit Office Report – and which saw the new Parliamentary Under-Secretary for Housing and Homelessness Heather Wheeler taken to task by a multitude of Opposition MPs.

Increasing demands upon local authorities at a time when their grants from central Government have been considerably depleted year upon year in recent times has led to a number of significant issues arising due to lack of funding.

The debate, secured by the honourable Member for Weaver Vale, Labour MP Mike Amesbury was to consider the NAO Report and the impact upon local Council and their ability to deliver services. The consequential impact upon public sector workers was also widely discussed by Members throughout the debate.

Mr Amesbury said:
” As a former councillor, I know that local government holds our communities and services together and makes our towns and cities what they are. Our local government leaders take decisions and hold responsibility for budgets that directly affect their constituents just as much as, if not more than, many Members of Parliament. They deserve more recognition and respect for that than they are sometimes given. However, since 2010 their very challenging job has become almost impossible. The National Audit Office report makes it clear that funding has been cut by nearly 50%. As a result of that 50% cut, services have been drastically reduced. Pressures and demands are increasing, but the Government have failed year after year to provide councils with fair and sufficient funding.”

Referring specifically to the issue of children’s services, the debate identified rising demand in the majority of the local authorities in the country. Of particular note was the reality of underfunding; with an expected shortfall in funding towards children’s services to be of the region of £2bn by 2022.

In its report, the National Audit Office concludes that:
” As funding continues to tighten for local authorities and pressure from social care grows, there are risks to statutory services.”

During the debate, Matt said:
“One of the great problems for many children’s services departments operating in areas of high housing cost is that it is particularly difficult to recruit staff. We have a severe problem with that in Reading. We are outside the boundary for outer London weighting, which stops at Bracknell, even though that is an area of lower housing costs, and we suffer from a severe shortage of skilled workers to work in our children’s services department. I understand that is a common problem for local authorities, and particularly for those in areas of high housing costs. There are issues with both pay for staff at those grades and the ability of local authorities to provide their own council housing. Reading had a plan to build 1,000 council houses, which sadly was stopped by George Osborne.

Would my honourable Friend like to comment on the twin problems of low pay for key staff and the inability of local authorities to build housing for them?”

Concerns continue surrounding the double-pinch approach with regard to areas of high living costs coupled with underfunding to meet the increased demand on services. The impact of the present situation upon areas of high living costs on public sector workers means that the recruitment and retention of qualified skilled workers in Reading has already been identified several times as a key concern by Matt. Further, the matter for the existing workforce in the town is the issue of a pay cut in real-terms in recent years due to those increased living costs coupled with wage stagnation. The general atmosphere in the debating hall was that the report also identified a lack of any long-term local authority funding plan from the Government, whilst all the time the demand upon services continues to rise.

The recent Spring Statement from the Chancellor has shown that the Government have no plans to abandon their austerity programme; this means that local Councils will be placed under even greater pressure to meet the soaring demands on their services with little or no budget to deliver those public services. During the debate it was generally felt that a lot of Councils had done their utmost to shield their residents from the full force of Government cuts, but this had meant that funding had been squeezed from other vital services such as housing, libraries, refuse collection and so on.

Parliamentary Under-Secretary Heather Wheeler was accused of shifting money around from central Government to place the burden onto local taxpayers, and the budget set aside for local Government was still challenged by MPs to represent a 3% reduction in real terms from 2010-2017. Delivering service provision at local Council level was now seen to be failing due to chronic underfunding, and the escalating costs due to increased demand was highlighted further. The Parliamentary UnderSecretary was, at one point, challenged with the situation being similar to the ‘Emperor’s New Clothes’ -; the Minister speaking of finances increasing to local authorities when in fact they do not even keep up with the demand.

There were no Conservative backbenchers present at the debate, and it was commented upon by several Members who expressed concern that those Councils and local authorities would not have their matters represented or discussed in the debate.