MATT STANDS UP FOR READING IN LOCAL GOVERNMENT FUNDING DEBATE 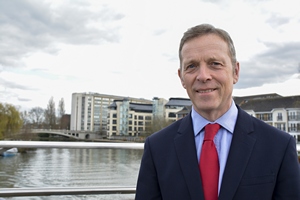 READING EAST MP Matt Rodda took a firm stance in support of his constituency and the town of Reading in a Commons debate centred around local Government funding.

The debate, brought before the House by Shadow Secretary of State for Communities and Local Government the honourable Member for Denton and Reddish Andrew Gwynne MP was to enable a frank expression of views on whether local Government has ‘severely suffered as a result of almost eight years of brutal and devastating cuts’.

Matt said:
“I am grateful for the opportunity to speak in this important debate. I would like to add my support to the comments made by my honourable Friend Andrew Gwynne and many other Opposition Members. I would also like to steer the debate gently back to reality and away from the comments of Steve Double (the Conservative Member for St. Austell and Newquay) who somewhat contradicted himself by talking about the need for more spending and less spending at the same time.

As we have heard, grants from central Government to local councils have been cut by nearly 50% since 2010, and there has been a 28% real-terms reduction in local authorities’ spending power. In my constituency, Government funding has been cut by nearly £58 million. In 2010, the council was relatively well supported by central Government, but after 2020 it is looking forward to a future with no central Government grant whatever. I am sure all Members are concerned about the fact that the Government have no long-term funding plan for local authorities. There is absolutely no clarity about how local government will be funded when the four-year deal runs out in March 2020, just two years from now.”

Matt continued, referring to the impact on services in his constituency. He said:
“Let me return to the impact of the cuts on my constituents in both Reading and Woodley. While Government funding has fallen, the cost of providing services has risen and continues to rise. Reading Borough Council has a strong track record of maintaining necessary services for residents. Unlike neighbouring Conservative-run West Berkshire council, it has kept all its libraries open. It has maintained awardwinning parks and a council-owned theatre, as well as a wide range of the vital frontline services that ensure-as other Members have pointed out-that vulnerable children, adults and families are protected. However, like many councils throughout the country which have a statutory duty to provide adult and children’s social care, Reading is forced to make cuts to other services just to balance the books.”

Reflecting on the findings of the recent National Audit Office report, the contents of which Matt also contributed to during a Commons debate last week, he continued:
“A recent National Audit Office Report report on the sustainability of local authorities found that, nationally, the knock-on effect of such cuts is a reduction in spending on other hugely important services on which we all rely, such as planning and development, highways and transport, and housing. Housing is a vital service in Reading, as it is in many other English towns. Local people rely on and expect councils to be able to provide a wide range of high-quality public services, including services for the elderly and for children, and care for vulnerable adults.”

Following a brief intervention by the honourable Member for Coventry South, Jim Cunningham, Matt concluded:
“I wholeheartedly agree with my honourable Friend. I am sure that the situation in Coventry is very similar to that in my own area. I am proud of the achievements of my Labour-led council, which provides vital services for the people of Reading while under intense financial pressure, but the current funding situation is not sustainable in the medium or the long term. The Government have failed to stand up for local communities. They have forged ahead with their failed austerity agenda, and-as has been pointed out by my honourable Friend Mr Cunningham and many other Members -; have left councillors to make the most painful decisions about which vital services will be cut.

“Sadly the Secretary of State is no longer present, but I say this to the Minister:
surely it is time for the Government to listen to local authorities-to listen, indeed, to some of their own local councillors-and to deliver the fair and adequate funding for local councils that we all know they deserve.”

Ranil Jayawardena, the Conservative MP from neighbouring North East Hampshire referred negatively to Matt’s speech to the House. He said:
“While I listened carefully to what was said by Matt Rodda, I am sorry that he was, from my perspective, the voice of doom and gloom. In my time in local government I saw many positives, and I think it important to take account of that in the context of funding.”

The ‘doom and gloom’ of the reality of central Government cuts to Reading Borough Council’s budget is clearly evident, especially when considering the effects upon areas such as – but not limited to – housing, neighbourhood services, leisure and recreation facilities, libraries, environmental health, licensing, and highways.

The Question was put and the House divided. Votes for the Ayes were emphatic at 238-0, with Mr Deputy Speaker of the House, the Rt. Hon. Lindsay Hoyle MP declaring that the question was put to and accordingly agreed. He further advised the House that a written report would likely be submitted in response to this by 19 April 2018.