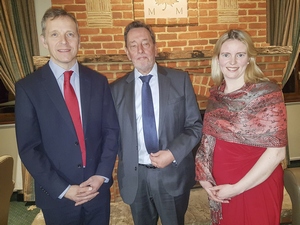 Lord Blunkett began his political career as a Sheffield City Councillor; he became Leader of the Council and then Member of Parliament for Sheffield Brightside. He was the Shadow Secretary of State for Education and Employment before taking the role of Education and Employment Secretary in the last Labour Government, and then became Home Secretary from 2001. David Blunkett stood down from the Commons in 2015 and became a Member of the House of Lords.

As Education and Employment Secretary, he fought tirelessly to ensure standards of literacy and numeracy were improved. This included a joined-up approach involving Government, Local Education Authorities, teachers, parents, governors, the media, publishers and businesses. Standards were also raised through further development of teacher training and professional development. Extra funding was also provided to keep class sizes under 30 for five, six and seven-year-olds, to enhance teaching
and learning.

The SureStart initiative was also founded in the Blunkett years; a programme which enabled pre-school children and their families to access education, childcare, health and family support. Sadly, in 2011 the coalition Government started what effectively became the abolishment of the SureStart programme by removing the ring-fenced funding which was previously earmarked for the initiative, cutting back on available funds for SureStart projects. 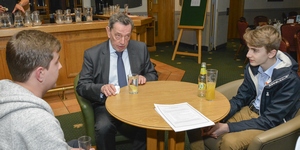 Sixth Form students from Highdown School were treated to a Q&A session with Matt Rodda as well as the eminent parliamentarian Lord Blunkett, ahead of a fund-raising dinner which took place at Caversham Heath Golf Club. 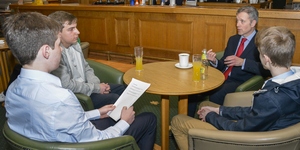 Matt said:
“It was wonderful to welcome David back to Reading again, and we are very grateful for his support.”

Reading West parliamentary candidate Rachel Eden said:
“Lord Blunkett was both witty and insightful; sharing his lessons from a lifetime of public service. It was wonderful to have his support for our excellent Council candidates.”