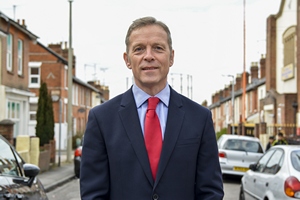 READING EAST MP Matt Rodda addressed a Westminster Hall debate which centred around the issue of housing of multiple occupation (HMO). The debate, under the Chair of the Rt. Honourable David Hanson MP was brought by the honourable Member for Ealing North, Stephen Pound MP and centred around local authority planning and control of HMO residences.

The first point is about the sheer proliferation of HMOs in urban Britain today. In my experience as a former councillor and now as an MP for a town in the country some way from London, the scale is quite significant and might not be fully recognised by
all colleagues. Some 28% of the housing in Reading is now privately rented, and a significant proportion are HMOs. The typical issues that we face in our town may well be familiar to colleagues representing similar sorts of towns with similar street layouts. We have a lot of Victorian and 1920s housing. We have a limited amount of street space for parking-it is not like a rural area, with driveways or land at the side of buildings. One of the big challenges that we face-I suspect that other honourable Members may face it in their constituencies-is the sheer volume of cars generated by HMOs, in what are already densely populated areas.

The second serious and practical problem is the large number of additional refuse bins that are created. That might sound like a mundane matter, but as my honourable Friend the Member for Ealing North pointed out, a sudden change in the housing ownership on a quiet street can dramatically alter its appearance. It can be quite disturbing for local residents to suddenly see large numbers of new bins popping up in front gardens and large numbers of cars. The other issue is that many small front gardens become overgrown and much less attractive. It can be quite a dramatic change for residents who are used to living in a settled urban environment -and who are often from a range of age groups, from young couples and single people to elderly people-to suddenly have a proliferation of very often temporary residents who are unable to stay in the area for long and, as a result, unfortunately unable to put down roots.

I would also like to speak up for the residents in HMOs and to consider things from their perspective, because part of the issue is the wider lack of housing supply in the country, particularly in hotspot areas. I do not know about Northampton, but I suspect that, like us, it may face a chronic lack of housing. Part of the problem is that there is just not enough affordable housing for young people and people moving into these areas. Although this is not quite at the rates found in the constituency of my honourable Friend the Member for Ealing North, I know someone who recently had to pay £300,000 for a two-bedroom terraced house in Reading town centre. That is pretty expensive. What we really need is more affordable housing to buy and more affordable council housing to rent.

I urge the Government to look into this. The article 4 directions offer some ability for local councils to intervene, but they are wholly inadequate. If the Minister can comment on that and suggest ways of enhancing legislation, I will be extremely grateful.”

Helen Wheeler, the Parliamentary Under-Secretary of State for Housing and Homelessness responded that she recognised the areas of concern of HMO housing on local areas, but emphasised that local authorities already had a range of tools to ensure that the impact of HMO housing could be properly addressed.

Further, she stated that “HMOs play an important role in the private rented sector. They provide a cheaper alternative to other private rented accommodation and flexibility.”

Mandatory licensing of HMO accommodation where five or more unrelated tenants share facilities is expected to come into force in October 2018, however, it was highlighted by the Parliamentary Under-Secretary that there is not, at present, a limit on the number of HMO licences that a local housing authority can issue.

An excerpt from Matt’s address to the debate can be found here.