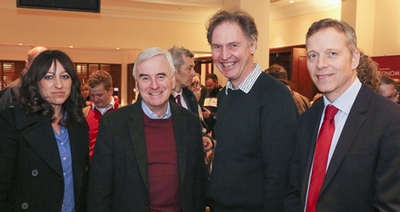 READING EAST MP Matt Rodda attended the Regional Economic Conference in Southampton at the weekend. Shadow Chancellor John McDonnell MP gave a keynote speech challenging the Conservative Government on the lack of investment in the UK economy as a whole, and also sought to hold them to account on their failed policy of austerity.

Matt said:
“I was pleased to be able to support our Shadow Chancellor, John McDonnell, by attending the Conference last weekend -; which I am pleased to say went ahead and was well attended despite the wintry weather in Southampton.

I and several South East MPs led breakout sessions and supported John during the day. I was pleased to be able to lead a session on investment in the South East, and I believe this is a key issue facing Reading and Woodley, in addition the region as a whole.”

A copy of the keynote speech delivered by the Shadow Chancellor can be found here.