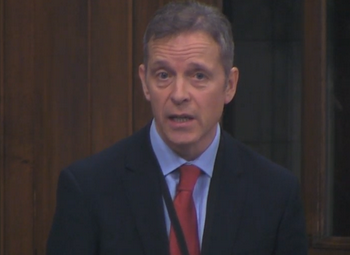 READING EAST MP Matt Rodda was invited by the Shadow Minister for Labour and MP for North and West Durham, Laura Pidock to speak at a Westminster Hall debate recently. The debate was to speak on claimants’ experiences of the Personal Independence Payment (PIP) process and at times became quite a heated exchange as members from all parties recounted specific concerns and worries from their own constituents.

Speaking candidly about the experience of a Reading East constituent, Matt said:
“I want to reinforce the points made by a number of members. To put it quite bluntly, I believe the emotional trauma caused by PIP and the Government’s approach to administration has led to suffering on what can only be described as an enormous scale. I want to give one example of a constituent as I think her case illustrates the fundamental problems with PIP, and to make two other brief points, if I may.

“My constituent suffers from chronic long term and debilitating back pain; a pain which I should say has been made worse by the aftermath of an operation where she suffered terribly – and yet after her Disability Living Allowance (DLA) was terminated
she was awarded much less support through PIP, and her Mobility car was taken away because she hadn’t scored enough points due to the arbitrary nature of the assessment. Ironically I believe it can be said in this and in many other cases that PIP
actually reduces people’s personal independence and mobility, and that is one of the fundamental problems with this system which we need to consider.”

He continued:
“There are two other brief other points I want to address. The first is the length of time which people suffer because of the trauma caused by the system. I think it is important to note that all too often the ordeal doesn’t stop with the assessment -that’s just the beginning of a very, very, lengthy process. I would like to mention the example of a constituent who is living in a flat so small that there isn’t even room for her husband to stay, and she is having to contend with living alone in cramped conditions and in pain. And if this isn’t bad enough, she is also having to find the strength to formally challenge her initial assessment report because it does not reflect her condition or what she said to the so-called health professional.”

“There is a wider issue also with the due weight that is being given to medical evidence, as one of my colleagues mentioned earlier. There are cases where the written evidence of GPs and consultants is being discounted or not being given proper consideration because according to the Department for Work and Pensions (DWP) they are regarded as being an ‘applicant’s advocate’, and are therefore in the warped world of PIP and assessments, somehow biased. The irony of that of course is that the Government gives total credence to the advice given by their own socalled health professionals who, as we have heard earlier, are not necessarily trained in the specific area of medicine which they are due to be assessing. I think it is a top priority that this area in particular gets reconsidered by the Government.”

I would like to make a suggestion to the Government. How about going back to the drawing board and designing a system that listens to people and allows them to express their issues in their own words. Above all, how about developing a system that demonstrates real compassion and decency, which we had for many decades in our welfare state? The Government can and must do better. It is so obvious that the current system is designed and contrived to cut public spending. I ask the Government to think again.”