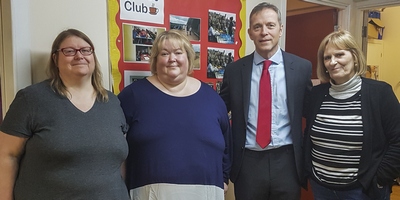 Matt Rodda, MP for Reading East visited Reading Mencap to discuss the demands on their services, and the impact of Government cuts in disability-related welfare support payments on their service users.

Over 200 individuals are registered at Reading Mencap, and they enjoy a wide variety of activities and clubs which include children’s clubs and crafts through to cooking, gardening, karaoke, and socialising for adults.

An issue causing considerable concern was the Government phasing out Disability Living Allowance and the number of Mencap service users now being re-evaluated for the Personal Independent Payment (PIP) – and subsequently deemed ineligible for financial support, even though their learning disabilities are lifelong.

Staff and advisers at Reading Mencap report that they are finding a lot of their time is being taken with providing advice and support to members, as well as attending tribunals for disabled people who have appealed after seeing their benefits cut when they were moved onto Personal Independence Payments. Some service users are also facing further difficulties due to the introduction of charges for care; and the hardship and problems occurring from this extra payment -; a financial cost which many councils (who themselves face Government cuts) now expects individual to pay for.

Matt said:
“The effect of these cuts and changes to benefits are deeply unfair. It is appalling that some of the most vulnerable people in society are being penalised through no fault of their own.”

On 29 January 2018 a High Court ruling found the system for Personal Independence Payment (PIP) claims to be ‘blatantly discriminatory’ against people with mental health problems. Following the ruling, the Government is now faced with having to
reassess every Personal Independence Payment (PIP) claim; a process which is estimated will take several years at a cost of over £3.5bn. Of the 1.6 million claims to be reassessed, it is envisaged that around 220,000 claimants are likely to be in line to receive higher allowances.

Shadow Minister for Disabled People Marsha de Cordova MP said:
“How long will the review take; weeks, months or years? The Government haven’t produced a timetable on how they’ll rectify the mess they’ve got themselves into.”

She added:
“We are pretty appalled and outraged at the mess that the Government have found themselves in; and this is all of their own doing from introducing these regulations last February which was going to restrict the numbers of individuals that would qualify for Personal Independence Payment (PIP) – and specifically those with psychological distress. It begs the question what is any Government doing introducing regulations that are blatantly discriminatory to particular groups; and also raises the question about what equality impact assessments were carried out.”

Shadow Work and Pensions Secretary Debbie Abrahams MP also commented:
“The admission that the department will have to reconsider 1.6 million PIP claims to ensure that all claimants receive the correct award is shocking. The disabilities minister has refused to publish a timetable of how many months or even years it will take for this ‘complex exercise’ to be completed. The Government was wrong to cut PIP benefits in the first place, wrong to bring in the PIP regulations last year and it was wrong to repeatedly ignore the views of the courts.”