Matt has talks on Universal Credit at Reading Jobcentre 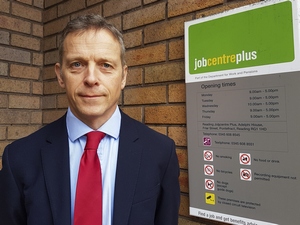 Labour MP for Reading East Matt Rodda held talks with staff and managers at Reading JobCentre Plus about the roll out of Universal Credit at their premises on Friar Street.

The Government started rolling out the new combined 6-payments-in-1 benefit, Universal Credit, in Reading and Woodley from 6 December 2017.

Labour has called for the benefit to be paused and fixed after a series of concerns were raised, including concerns about the average five-week wait until claimants receive their benefits; Matt has already pointed out some of the serious problems in
a debate in Parliament late last year.

Matt said:
“It was helpful to be able to discuss and share my concerns about Universal Credit with front-line JobCentre staff and managers here in Reading.”

It is understood that neighbouring constituencies in Berkshire, such as Slough and Maidenhead, are finally due to enter into Universal Credit during the Easter period, having had their roll-out delayed last Autumn.