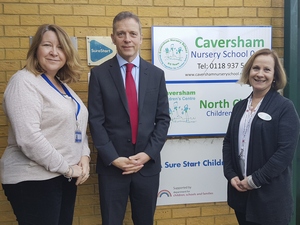 MP for Reading East Matt Rodda was invited to visit Caversham Nursery to discuss the challenges arising from the continued Government cuts that are affecting the Nursery and Early Years Foundation Education in the constituency.

Matt held detailed discussions with Lisa Bedlow, the Executive Headteacher of both Caversham Nursery and New Bridge Nursery School in Caversham alongside Jo Budge, the Headteacher of Blagdon Nursery School, where they jointly raised their concerns about the continuing financial cuts. Reading has five Nursery Schools; however they are placed within the same funding category as childminders under the New Funding Formula, causing financial pressure due to the higher costs associated with running a nursery such as costs for qualified teaching staff to maintain the teacher to pupil ratios.

Matt said:
“Reading’s nursery schools are outstanding, but they face a series of extra costs
which are threatening them at a time when they are already stretched because of
Government cuts.

“I am calling on the Government to address these and other issues to ensure that our
nurseries are properly funded and are able to provide children with the best start in
life.”