National Day of Action: The NHS 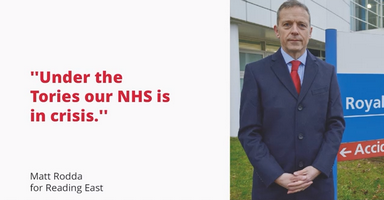 The National Health Service is in its own state of emergency and the Labour Party’s National Day of Action focused on highlighting the issue across the country.

Continued pressure on the NHS in Reading has led to many cancelled operations and the Royal Berkshire Hospital struggling to meet the increase in demand. The hospital appealed to medical and nursing staff to turn in and cover extra shifts over the Christmas and New Year period, in addition to recruiting voluntary support from the St. John Ambulance to help out in the A&E Department.
Planned surgery has been cancelled in hospitals across the country for the whole duration of January 2018, with some patients being told as late as being laid on a trolley in the hospital recovery room awaiting preparation for their operation.

Matt Rodda, MP for Reading East said:
“I’m concerned about the pressure on our hard working local NHS, which has been underfunded for several years. The Government has failed to give the NHS the resources it needs, despite the significant increase in the demands on the services. Under the Tories, our NHS is in crisis.”