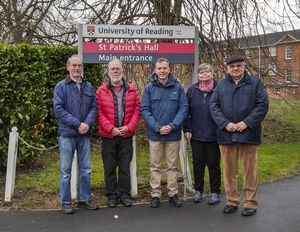 Following on from his letter to the Planning Department at Reading Borough Council just before last Christmas in relation to the planned development at St. Patrick’s Hall, Reading East MP Matt Rodda took some time to re-visit the area and listen to residents’ concerns.

The Planning Application is listed to go before the Planning Committee at Reading Borough Council on 7 February 2018, and Matt was interested to hear residents’ thoughts and also support them as they prepare for that meeting.

Matt said:
“Whilst I am aware of Reading University’s need to increase it’s supply of student accommodation, the planned development for St. Patrick’s Hall would have an unacceptable impact on the heritage of the surrounding area at Northcourt Avenue.”

He added:
“Constituents are rightfully concerned about the effect of such a development. This is a very large and imposing proposed development, and is out of character with the low-rise arts and crafts era buildings in this vicinity. It could do serious damage to
this historic area.”

“Residents in the area believe that if the tower block were to be erected as planned, it would set a precedent which could have an ongoing and severe impact for areas in Reading which have buildings of character and heritage.”

Matt said that he hoped the Planning Committee would listen to resident’s concerns and refuse the application.