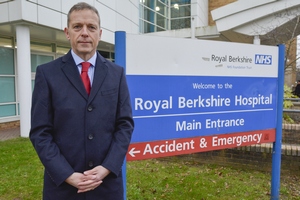 Continued pressure on the NHS in Reading has led to many cancelled operations, and the Royal Berkshire Hospital is struggling to meet the increase in demand. The hospital has not only had to appeal to medical and nursing staff to turn in to cover extra shifts, but news has also emerged of the NHS Trust drafting in volunteers from the St. John Ambulance. Planned surgery is being cancelled for the whole duration of January 2018, with some patients being told as late as being laid on a trolley in the hospital recovery room awaiting preparation for their operation.

MP for Reading East Matt Rodda was interviewed by Mel Bloor from ITV Meridian, which was broadcast as the lead item on the 6pm news on Monday 8 January 2018.

“I am very concerned about state of the hospital at the moment. The staff are working very hard, but they just haven’t got the number of people available to cover all the operations that are needed; and what the Government needs to do is invest more money, take some serious action and have a proper plan to tackle this winter crisis.”

“It’s scary. Its busy; it’s going to get busier. We can’t give them [the patients] the best care that we want.”

Prime Minister Theresa May has reshuffled her Cabinet, and of particular note was the extension of Health Secretary Jeremy Hunt’s role to not only continue with Health, but with the addition of Social Care. Matt shared his concerns at this appointment and said:

“Our local NHS is under severe pressure as Government funding fails to keep up with demand. We are experiencing a real crisis with overworked and underpaid staff, and the gradual privatisation through the contracting out of various services and walk-in
centres. Our social care system faces similar challenges whereby demand outstrips provision.

Over 2.3 million people may now be living with unmet social care needs across England, and from 2010 to the end of 2017/18 around £6.3bn has been cut from the social care budget.”

” These figures reinforce the damage that reckless Tory cuts are doing to older people with growing care needs.

“Cuts to social care since 2010 are set to reach £6.3 billion by March 2018, the funding gap continues to grow year on year and quality of care is on a precipice. Yet there was no money in the Budget to deal with this crisis created in Downing Street, kicking social care into the long grass, with no plans to halt the crisis now.

“It’s clear that only Labour will ease this Tory social care crisis. Labour will meet the funding gap by investing £8 billion across this Parliament, with £1 billion up front this year, while putting in place plans to build a National Care Service, funded by sharing risk across the population.”