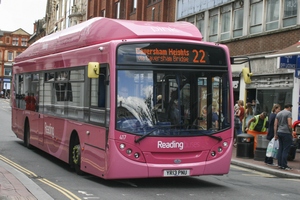 READING EAST MP Matt Rodda gave an update to constituents affected by the proposed changes to the 22 pink bus service by Reading Buses, due to come into effect in February 2018.

“I am pleased to hear the recent news from Reading Buses that bus journeys in the town have risen by over one million in the past year. I am also pleased that the bus company agreed to keep all the routes in Caversham and Emmer Green after our successful campaign to keep the 24 route and the 22 route between Hemdean Valley and the middle of Caversham Heights – and to keep the 25 running swiftly along Peppard Road rather than diverting off on a slower route. The extension of the 22 route to the Royal Berkshire Hospital is also welcomed. However I want to continue to raise the issues which still concern my constituents in Caversham Heights.”
He continued:
“I would like to see the 22 operating more frequently outside of peak times after the bus company continued to propose to reduce the frequency to an hourly service. I’d also like to see a Sunday service, which is something the bus company still proposes to remove altogether.
I have had some discussions already with Mr Gilbert since the Public Meetings, but I will continue to press him on this issue and hope to hear from him in greater detail in the New Year.”