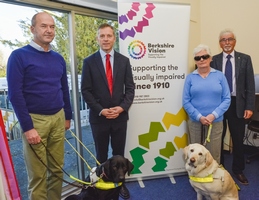 Following on from a meeting with Guide Dogs for the Blind Association during the Labour Party Conference last Autumn, Reading East MP Matt Rodda visited Berkshire Vision to listen to concerns from representatives about the challenges faced by the blind and visually-impaired community in relation to accessibility of public transport, as well as hear more about the work which they do with Guide Dogs.

Matt was interested to hear of particular issues such as mobility, especially for blind and visually-impaired people who often struggle to get out and about and not be socially isolated. Public transport provision was found to be a significant factor in helping or hindering this mobility, and the introduction of driver-only operated trains was highlighted as an area of concern over and above the widely-reported safety issues. The provision of a guard on board train services was felt to offer safety and inclusivity to blind and visually-impaired people, as well as assistance getting on or off the train.

Jenny Pape, a Trustee of Berkshire Vision spoke of the discrimination she experienced when trying to use local taxi services; saying she had been refused access to a taxi due to having a guide dog -; the reason being given by the taxi driver that her dog, Kashmir, would moult hairs onto the car seats.

“Kashmir gives me confidence to go out on my own -; and I enjoy it. She’s my eyes and she keeps me safe. I worry that it [my independence] could be taken away from me.”

Problems relating to the late timing of on-board bus announcements were also raised; especially as late announcements can cause the alighting from a service beyond a designated stop. Concerns about disorientation and route unfamiliarity by simply alighting from a bus just one stop too late can be the source of immense anxiety not only the visually-impaired person but also for the guide dog too.

“Transport is our biggest issue”, said Clive Wood, Community Engagement Officer at Guide Dogs for the Blind Association, himself a visually-impaired person reliant upon the assistance of his guide dog, Winnie.

Berkshire Vision holds clubs for many activities, including sports and crafts, as well as home visits. With increasing amounts of complex referrals, the charity undertook over 1,000 home visits in the past year.

“There are only so many people that we can cater for with our own minibuses and our corps of volunteer drivers, so the availability of adequate public transport services is essential to ensure that our members are not prevented from participating in our social and leisure activities simply because they can’t get out and about.”

After his visit to Berkshire Vision, Matt said:

“I am impressed with the wide range of services offered by Berkshire Vision whose aim is to support and engage with the blind and visually-impaired community in order to help them live full and enriched lives. However, I do share their concerns about social exclusion and isolation, particularly around the lack of adequate inclusive provision on our transport networks. I shall be engaging with other organisations and agencies to ensure that the considerations of our blind and visually-impaired community are always taken into account to promote social mobility and independence. I look forward to meeting with Berkshire Vision members again in the future to ascertain whether their voices are being heard on these important issues.”