Reading’s foodbank ‘Readifood’ braced for demand due to Universal Credit 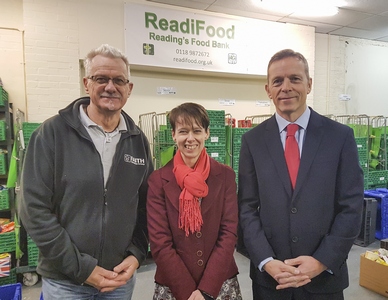 Reading’s foodbank service ‘Readifood’ announced it was braced for the extra demand in service ahead of the impending full-service roll-out of Universal Credit. The benefit, which combines six previous support payments into one single payment has been widely criticised on both sides of Commons benches and here in Matt Rodda’s Reading East constituency, with his recent attempt from opposition benches to try to persuade the Government to pause and fix what has been deemed to be a deeply-flawed system falling on deaf ears.

Labour and Matt as an MP has lobbied the Government on previous occasions to review the Universal Credit framework before its implementation, however, the Government have chosen to forge ahead with the continued roll-out of this benefit change and its associated delays, which it is feared will leave many people destitute. It has also been claimed that some Universal Credit recipients in others areas where the programme is already up and running are receiving almost a third less than their original benefit support amounts when payments finally start to filter through.

Matt Rodda visited Readifood recently to discover the impact that Universal Credit could have on their already stretched resources. Readifood is Reading’s foodbank and is a member of the Independent Food Aid Network. Over the past decade, foodbanks both inside and outside of the Trussell Trust network have been opening at an extraordinary and unprecedented rate. New research by the Independent Food Aid Network has revealed that there are more than 650 independently-run foodbanks operating across the UK. When this figure is added to the number of Trussell Trust foodbanks and smaller food stores, the number of outlets distributing food parcels across the country exceeds 2,000 separate distribution points.

“We aren’t panicking, but our delivery systems are already pretty much at capacity. We deliver by area to limit driving distances and optimise routes and we’re also running two vehicles which is an overhead cost. Even if only 10 people came online each week with Universal Credit – and with the delays before their first payment – I think the problem becomes evident quite quickly – and 10 per week strikes me as a massively conservative estimate.”

“We have an efficient process by which we receive food donations, coupled with the work of our teams of volunteers who help to pack and deliver the food parcels. However, what we also need are financial donations in order to help us continue to operate. The costs of renting and maintaining the building we run our Readifood service from are substantial, and we currently operate on a deficit of around £5,000 per month. Readifood would welcome pledges of financial support with open arms.”

“It is difficult to imagine the stress and deep financial distress that many of the people on this benefit will face over Christmas because of the ill-considered timing. From my perspective, this is wholly unacceptable, but I believe it is only one of a number of deep flaws in this ill-thought-through policy.

The six-week delay to payments doesn’t take account of the reality that many people, especially those on the lowest of incomes – will be the most affected. Where people have no savings at all to deal with the six-week wait, Universal Credit is increasing the risk of families or individuals ending up in a spiral of debt and unpaid bills, and it is of little comfort to those in most need facing the additional burden of having to repay any advance payment when they are already living a hand-to-mouth existence.

In our area, Reading Borough Council and local charities will do their very best to help those affected, but they have already raised serious concerns about this delay.”

“It has been estimated that at least 10,000 people in Reading East, and a further 12,000 people from Reading West will be impacted by Universal Credit. Readifood, who deliver food parcels to the people of Reading throughout the year, provide an important service to this town – a service which has seen the demand on their resources grow phenomenally over the years. Such growth can either be attributed to the generous nature of the people of Reading by their donations of tinned items to Readifood -; or the fact that the Government is continuing to run a deeply divisive programme of cuts which are not only too deep, but which has gone on for far too long. I am extremely thankful to Readifood for the vital lifeline which their food parcels provide, but I also feel we must hold this Government to account for the way in which their policies are driving the lower-paid people of this country back to living standards from a Dickensian era.”