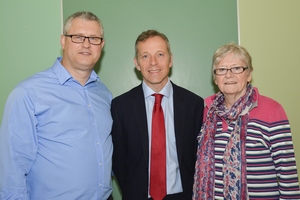 READING EAST MP Matt Rodda hosted a meeting in Woodley at the weekend as many local residents and bus users had their say over the recent loss of the 19a/c bus services.

The service, relied upon by those either without their own means of transport or who are less able to get out and about independently, was axed in September.
The route is the responsibility of Wokingham Borough Council who contract Reading Buses to provide the service.
Reading buses have been running the service at a loss and Wokingham Borough Council refused to pay the extra cost which would have allowed the service to break even.
Concerned residents across the bus route were eager to voice their disapproval over the loss of a much needed service. A replacement service, for the 12 bus route, is due to expire in September 2018.
Whilst neither representatives from Wokingham Borough Council nor Reading Buses were present at the meeting, the Chief Executive Officer of Reading Buses Martin Gilbert did provide a detailed formal response ahead of the Public Meeting.

“The orange 12 (and orange 19a/c in its previous guise) is not wholly our route. The route is there to serve local needs that Wokingham Borough Council has identified in their local authority area as it does not carry enough passengers for this to be a viable commercial route by Reading Buses, our any other bus operator. It is therefore organised by the Council who co-ordinate and procure it. The most recent contract was won on tender by us some years ago and as part of the bid it included a commercial extension, at our own cost, beyond the Borough boundary into Reading.

In later years costs have risen beyond the agreed contract rate and we have been operating the contract at a loss. However despite this we have honoured this contract until its natural expiry in July this year. Wokingham Borough Council and Reading Buses commenced discussions before Christmas on the next contract term or an extension of the current contract and various options have been discussed, with the Borough leading any consultations as they are their services not ours.”

“Agreement was reached in the summer for a short-term extension to the current contract. Reading Buses is unable to sustain a loss-making position on a contract beyond its committed term. We have not asked for an increase in the contract price to make a profit during this period, only to cover our costs.

“We continue to operate our main road orange 13/14 services from Woodley and claret 21 from Lower Earley on a commercial basis without any funding. These operate in the same way as the rest of the mainstream Reading Buses network, including providing a co-ordinated interchange in central Reading onto other services such as to the Hospital.

As with all consultations, we actively encourage people to feedback -; but in this case, they should direct their feedback to Wokingham Borough Council whose consultation this is.”

“The meeting was well attended with about 125 residents from the Woodley and Whitegates area attending to make sure their voices were heard. There was a clear consensus that the 12 service was not fit for purpose and that any new service should include timely and reliable access to the Royal Berkshire Hospital. The report summarising the meeting has been submitted to Wokingham Borough Council as part of their consultation.”

“I would to thank all the residents and councillors of all parties who attended. It is vital the voice of residents is heard.”

“Buses are a vital public service, which can be a lifeline to elderly and disabled residents and are also important to many other people such as families and commuters. I am working with residents, community groups, Councillors and all parties along with the bus company to try and protect these services