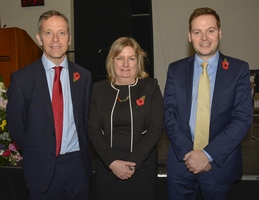 Reading Buses Chief Executive Officer Martijn Gilbert was present at the meeting which attracted over 140 people in addition to Councillor Richard Davies for Caversham Ward and Councillor David Stevens for Thames Ward, and Jane Stanford-Beale in her capacity as non-executive Director for the transport company.

Mr Gilbert explained that the proposals were just that -; proposals -; and that at this stage and all feedback during the consultation process would be considered when final decisions are made about the affected routes.

After the meeting, Matt said:

“I’ve been pleased to secure this second Public Meeting to enable those constituents who are bus service users to have their say on the current proposals being suggested by Reading Buses .I want to see bus services protected and I want to focus encourage discussion between councillors from different parties, residents’ and community groups, residents and the bus company.”

“I would like to thank Reading Buses for revising it’s original plans and I look forward to working with the company.”