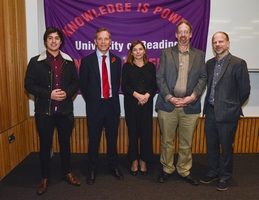 MATT RODDA MP attended a debate at the University of Reading to discuss the future of higher education, the rise in tuition fees and to give a first-hand account of being elected in a University seat at the last General Election.

Also in attendance at the debate were University & College Union (UCU) General Secretary Sally Hunt, the UCU Reading Branch President Paul Hatcher and the University of Reading Student Union President Tristan Spencer. The meeting discussed the issue of tuition fees and their impact on graduates, with the speaker’s reflecting on Labour’s policy of scrapping tuition fees.

The event was organised to mark 70 years of trade union representation for academics at the University. Paul Hatcher from the local union branch argued that while the Reading branch of UCU is mature enough to engage positively with the University over areas of common concern, it is strong and well organised enough to give the University clear feedback when it believes it has got things wrong.

Sally Hunt spoke about the problems the sector and individuals face as a result of the vote to leave the EU including the impact on researchers working on cross-border collaborations, EU colleagues worried about their future or attacks on academic freedom by politicians and some sections of the media.

“Now is a crucial moment for higher education. The general election showed that there is an appetite for policies that do not saddle students with a lifetime of debt. We aim to be at the forefront of the debate about how we deliver the properly funded universities of the future.”

“Brexit poses many challenges for all of us working in higher education. I am looking forward to seeing how we rise to those challenges and ensure our Universities remain the world-leading institutions we are so proud of.”

“Brexit has a huge impact on EU nationals which are a key part of this University. It threatens research collaboration and it threatens the freedom of research. Today’s mood seems to be going against the post-war advances that knowledge and education are good things.”

“87% of our students voted in the EU referendum. Of that 87%, 85% voted to remain. Sadly, the student perspective on Brexit at the moment is quite bleak.”

During the debate, Matt said:

“Reading is a fantastic University town and a leading research university, with a wide range of world class research, in areas such as agriculture, biological sciences, environmental, food and soil sciences amongst others. On the thorny issue of tuition fees, I am very pleased that Labour has addressed this in our Manifesto this year, and I think that this is a huge and very significant issue for young people across this country”