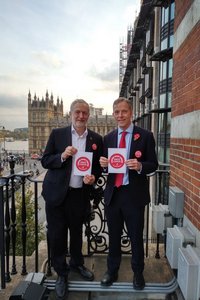 The strike action followed on from the failure of talks with ACAS to bring about an amicable solution to preserve and protect pension rights and entitlements of Unite members in their place of work with Capita Plc.

Unite members at Capita voted overwhelmingly in favour of strike action in a ballot, calling on their employer to give them a decent pension. In the industrial action ballot 95% of members voted for strike action, on a turnout of 72%.

Following this week’s action, it has materialised that employee pension values would hit much harder than originally envisaged, with some staff experiencing a decrease in their pension value by up to 70% as a result of Capita’s new proposals.

“It is deeply disappointing that Capita staff are forced into industrial action because of their employer’s disgraceful plans to slash the deferred pay that staff will get in retirement. Unite suspended its planned strikes in good faith in order to reach a settlement with Capita. Unfortunately the company has failed to make a reasonable offer to address the concerns of their workforce. Capita’s pension proposals will have far reaching consequences for the retirement of many Unite members. Some staff will lose a shocking 70% of their retirement income. There is no justification for highly profitable Capita to treat its workforce in this manner. The extremely high vote in favour of strike action shows how strongly members feel about this.”

“We have had solid support from our members across the country, and we want to thank the general public in Reading for their encouragement and solidarity. The issue is not going away. Capita should take note of this fact and now enter into meaningful negotiations. Unite’s door is open, and we look forward to resolving this dispute with them.”

“Capita workers face far reaching changes to their pensions, which could leave them much worse off. I’m calling on Capita to rethink these proposals which could leave some of its hard working staff 60 -70% worse off. I’m also extremely grateful to Jeremy for his show of solidarity towards Unite in their strike action over these proposed changes to their pension schemes. “