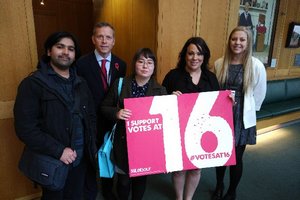 THE HOUSE OF COMMONS is set to vote on a Bill on Friday 3 November which could decide whether young people should be able to vote in elections from the age of 16.

The Labour Party believes that by granting votes to 16 and 17 year olds, it will engage them at the ballot as many of these young people hold many responsibilities in society. Allowing votes at 16 will also empower young people through a democratic right to influence decisions which will define their future, and it will also inspire them get involved in democracy.

“It was proven during the last General Election that young people have a passion and energy for engaging in politics. This is especially important as they start to understand the impact of politics on their everyday lives. 1.5 million young people aged 16 and 17 are currently denied the right to vote. At the age of 16, young people can consent to medical treatment, pay Income Tax and National Insurance, work full-time, get married or enter into a civil partnership. They can also change their name by deed poll, become the Director of a company, join the Armed Forces or even become a member of a trade union or a co-operative society. However, they cannot vote. This means that this segment of our society doesn’t have a voice at the ballot box. I think that’s unfair and would urge everyone to sign the petition launched by the Labour Party.”

The current petition can be viewed and signed by visiting www.labour.org.uk/votesat16.