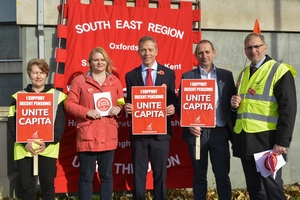 READING EAST MP Matt Rodda showed his support for Reading office workers who could lose up to a third of their pensions and who have taken strike action after a lengthy dispute with their employer, Capita.

It has been estimated by the union Unite, which represents many of the workers, that the loss to some employees would be around 20-30% of their pension value following series of proposed changes.

Plans proposed by Capita have included reducing benefits such as ‘death in service’ protection, long-term sick cover and spousal pension. The proposals follow earlier changes in 2009/2010 when a final salary pension was replaced by a career average scheme.

Negotiations have resulted in an improved offer and the restoration of most benefits, however, Unite believe that the proposal will still result in substantial cuts to employees’ retirement income, and issues surrounding the spousal pension arrangements remain.

The original strike action was cancelled to allow further talks to take place with ACAS, although these discussions failed to materialise an amicable resolution to the dispute.

“The cost of living is rising and people are facing a squeeze on their pay and pensions. I am concerned about these proposals which could have a significant impact on Capita workers, and I hope the company will now rethink this package.”