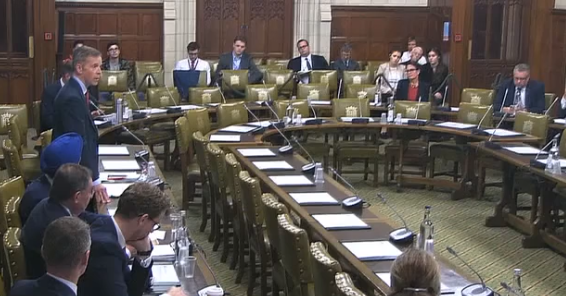 READING EAST MP Matt Rodda spoke in a Westminster Hall debate yesterday on the issue of improving rail links to the South West. In his address, Matt also emphasised the importance of investment in local transport links and in particular, the much-needed new station at Green Park, Reading, which will attract new business to the area.

In various speeches from several Members, support was sought from the Government to obtain Department of Transport’s agreement to invest in rail services which will increase capacity and frequency, upgrade signalling and reduce journey times which will ensure the railway links to the South West can be robust and resilient enough to properly serve the area.

“I thank you for giving me the opportunity to speak this afternoon, Mr Evans, and my honourable Friend the Member for Plymouth, Sutton and Devonport (Luke Pollard) for securing the debate.”

“I shall address my remarks to my constituency in Reading, which, as many people know, is served by rail services that start both in the far west of Cornwall and in west Wales. They meet at Reading and go on to London.

The state of the line at Dawlish is understandably of great interest to residents of the south-west, as we have heard. However, it also has real significance for Thames Valley passengers, as my honourable Friend the Member for Slough (Mr Dhesi) mentioned. Delays on the line have a direct and immediate impact both on long-distance travel and commuter services. I shall address the economic benefits for Reading of having a more reliable and robust long-distance service to the far south-west, and then pick up on some benefits to commuters in the Thames Valley area.

“On the first issue of long-distance rail services, rail travel from Reading to Exeter takes less than two hours-a significant advantage that we share as nearby large towns and small cities within a growing and advanced economy-and I encourage the Minister to see that advantage and invest so that our residents and businesses can make better use of that. Exeter and Reading both possess similar local economies, and the interconnection of businesses could be taken further. The Met Office, for example, was based in Berkshire and has been moved to Exeter. We have a considerable IT industry in Reading that forms a supply chain for the Met Office and other public sector IT procurement in the south-west. A far better rail service between Reading and the Thames Valley and other towns and cities further to the west can only support business and growth in both regions

“Moving on to the advantages to be gained for local commuters, when the Dawlish floods occurred there was significant and sustained disruption in the Thames Valley as railway services were affected. A large number of commuters had to decamp on to other services, such as those coming from west Wales or Oxford through Reading. That had a knock-on effect both on commuters who would have taken services from the west country up to London that stopped at Reading, and on commuters on other services. I very much hope that we can avoid any repeat of that type of disruption to our local economy and society in the Thames Valley.

In his summing up, Matt also referred to the proposals for a local station at Green Park, Reading. The investment for this new station was welcomed by Matt; such funding being an issue which Reading Borough Council had been pressing for for some time. He said:

“I will also highlight two other brief, related points. One is the benefit of further investment in local stations, which some honourable Members from the south-west have mentioned. We need a new local station on a line near Reading at Green Park. I concur with Members’ views on the benefits of local stations in growing the local economy. In our case, the station in the area near Reading would help to attract further IT investment to the town and put a greater emphasis on local transport being through public transport rather than road services. It would also generate further benefits by reducing air pollution in our area.

“Let me finish by concurring with other colleagues who have pointed out the need for a shared and collaborative approach between towns and cities across southern and south-western England. I fully concur with the honourable Member for Cheltenham (Alex Chalk), who made eloquent points about his city needing a better rail service into London. We appreciate that-we are better served-but together we all stand to gain from further investment in the region if the Minister hears our concerns, so I hope that he can respond by reassuring residents across the region.”