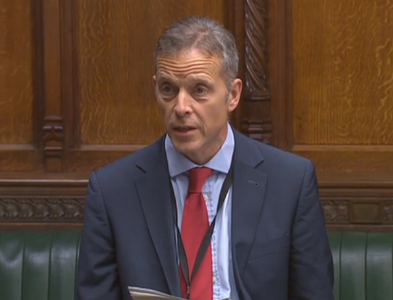 Universal Credit will replace Child Tax Credits, Housing Benefit, Income Support, Income-based Jobseeker’s Allowance, Income-related Employment and Support Allowance and Working Tax Credits, rolling them into one single payment. It is due to be rolled out in Reading from 6 December 2017.

All speeches during the debate were limited to a strict two-minute time limit, given the number of Members wishing to speak. Addressing the House during the Opposition Day Debate on Wednesday 18 October, Matt said:

“I have been interested to hear the range of views discussed today. I am from one of the areas where universal credit will be rolled out in early December, much to the concern of local residents. It is difficult to imagine the stress and deep financial distress that many of the people on this benefit will face over Christmas because of the ill-considered timing. From my perspective, this is wholly unacceptable, but I believe it is only one of a number of deep flaws in this ill-thought-through policy.

As we have heard, the six-week payment delay is a severe flaw. It does not take account of the reality that many people, especially those on low incomes, not only budget on a bi-weekly basis, but are in some cases paid once every two weeks. In our area, Reading Borough Council and local charities will do their very best to help those affected, but they have already raised serious concerns about this delay.

I should point out that the country as a whole is experiencing a dramatic rise in rent arrears, as well as increased evictions. We have noticed that in our town, and it is the same in many others in the south-east, as my hon. Friend the Member for Slough (Mr Dhesi) mentioned. That is because of the difficulty that people who receive the benefit experience in budgeting to cover their rent. It is also because landlords appear unwilling to house people on universal credit. I have been warned about that as an MP and previously as a local councillor, and I have heard worrying evidence of it from tenants and community groups.

Evidence also suggests a link between the six-week delay and the pressure on food banks. Food banks in areas of full universal credit roll-out have experienced a 17% average increase in referrals for emergency food-more than double the national average. Delays in receiving benefits and changes in benefits have become two of the three top reasons for referrals to food banks.

Those issues, linked with the delay in payment, have contributed to an increase in loans being taken out to meet basic needs-“

Shortly before 7pm, the House rose to vote, having been divided on the proposed motion; that being for the House to call on the Government to pause the roll-out of Universal Credit full service. The motion, though not binding, returned an overwhelming vote of 299-0 against the Government, and it is hoped that the Prime Minister will return to the House with Ministers to provide a response to this debate – a sentiment echoed by the Speaker of the House, the Rt. Hon. John Bercow MP.

Had time not been of the essence, Matt’s full speech would have been as follows:

In Reading this new benefit will be introduced on the 6thof December but because of delays in payment many people receiving Universal Credit will only be paid in the middle of January, something I think the whole House would agree is unacceptable.

It is difficult to imagine the stress and deep financial distress faced by many on the benefit because of this ill-considered timing. This in itself is wholly unacceptable.

There is also a series of deep flaws in the Universal Credit roll-out:

The first major flaw in the system is the six-week waiting period that claimants are quite often obliged to go through before they can receive any payments. The Department for Work and Pensions’ justification for this rule is that, in theory, claimants will still have a month’s pay to live off before they have to receive benefits.

The country is experiencing a dramatic rise in rent arrears as well as increasing evictions, and there is good evidence to suggest that the introduction of Universal Credit has been a major factor. This is because of the difficulty of people who receive the benefit budgeting to cover their rent, and also because landlords appear to be unwilling to house people on Universal Credit. I have heard worrying evidence of both tenants and landlords concerns in Reading; these new pressures are adding to the severe difficulty for low income families in our overheated local housing market.

There is also worrying evidence which suggests a link between the 6 week delay and pressure on the use of foodbanks. Foodbanks in areas of full Universal Credit roll-out have seen a 17% average increase in referrals for emergency food, more than double the national average of 7%. Delays in receiving benefits and changes in benefits have become two of the top three reasons for referral to a foodbank.

These issues, clearly linked with the 6 week delays in payment, have contributed to an increase in loans being taken out to meet basic needs. Where people have no savings to deal with a 6 week wait, Universal Credit is increasing the risk of families or individuals ending up in a spiral of debt and unpaid bills.

I welcome the minister’s belated move, under significant pressure from the Opposition and his own benches to introduce loans as a stop gap. But as about half of new claimants request these loans clearly it’s the system that is broken and this 6 week waiting period should be significantly reduced.

I also acknowledge that the department has now listened to concerns raised by Labour and others about the scandalous phone charges. I am pleased that the Minister is scrapping the Universal Credit helpline which costs 55p per minute.

I would however urge the Department to review the complicated online-only application process which seems to add further problems to people already under severe pressure, and may be adding further to the problems associated with this benefit. Given that the aim of Universal Credit was to simply the system it is important that this is also changed.

These points are all significant, the time of year this benefit is being introduced; the time taken for claimants to receive the benefit; the difficulty of managing money; the terrible problems of rent arrears and loss of housing; the dreadful rise in the number of people seeking help from foodbanks and the administrative problems. All of these are serious and substantial issues which need addressing.

Given all these concerns I would urge the minister to listen to members on these benches, his own colleagues and the voluntary sector and delay the implementation of this benefit.

The stakes are very high for those in need they – face a dramatic and ill-considered change in the run-up to Christmas. At the very time when they should be looking forward to trying to spend time with their families they face a huge and unsettling change.

Will the minister please reconsider and prevent Christmas for these vulnerable people from turning into a Dickensian misery.”