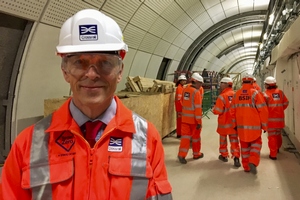 Reading sits at the north-western edge of the newly-constructed Elizabeth Line, which is a new railway for London and the South East running through 26 miles of new tunnels under central London. It is part of the overall £14.8bn Crossrail programme. Crossrail has the potential to create jobs and further development in Reading, especially with the redevelopment of Thames Tower on the Station Hill concourse, and also the planning applications already being made for sites near Reading Station.

Construction on Crossrail began in 2009 and is now almost 90% complete. The service will be run by TfL (Transport for London) through the central London network from December 2018 when the new railway will be fully-integrated within TfL’s existing transport network. New state-of-the-art trains will carry an estimated 200 million passengers per year. The new service will reduce journey times, increase the capital’s rail capacity by 10% and bring an extra 1.5 million people to within 45 minutes of central London.

Bond Street will increase transport capacity directly into the heart of London, and the new station will provide an interchange with the Jubilee and Central Lines which, combined will accommodate more than 225,000 people every day. Two new ticket halls will be at street level, and are connected by two 260m long platform tunnels running 30m below ground.

“Having direct access into central London will be a huge bonus for Reading commuters and should ease the current levels of congestion presently experienced on the services to London. It is hoped that the introduction of Crossrail to Reading will help to separate out the peak-hour business traffic and help deliver those people closer to their places of work, leaving spare capacity on already over-stretched high-speed and stopping services to London Paddington.”

“Shoppers and visitors to London from our town will also benefit by being able to travel directly into the very heart of London, and have more immediate onward connections to the shopping districts and the West End. Electric trains will provide a cleaner, greener and more efficient service connecting the Thames Valley with the capital and vice versa – and that can only be good for people, and good for business.”