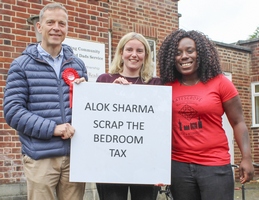 MATT RODDA MP met with local campaigners in Reading recently to support their efforts in seeking to scrap the Bedroom Tax. Several hundred Reading families are affected by the Bedroom Tax – with over two thirds of them women; many of which are in households with dependent children.

“The Labour Manifesto promises to scrap the Bedroom Tax. I wholeheartedly support that promise. Hundreds of people are affected in Reading and I think it is unfair for the Government to penalise those in the lowest income bracket with yet another financial burden. The Bedroom Tax is divisive and plunges those in society who need the most help further and further into debt. Austerity is a real issue in Reading, and the Bedroom Tax makes an already dire situation worse. I would call upon Alok Sharma as both a Reading MP in the neighbouring constituency and also as the Housing Minister to reconsider the continued imposition of the Bedroom Tax.”