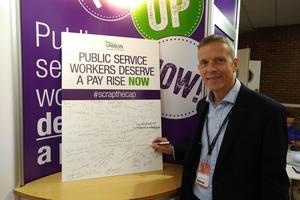 READING EAST MP Matt Rodda visited the Unison stand at the Labour Party Conference in Brighton and signed the pledge being promoted by the public services union.

Unison’s current campaign being highlighted at the Labour Party Conference is ‘Pay Up Now’. The union’s position is that public service workers have had their pay held back by the Government for years in the name of austerity. After an initial pay freeze and then a pay cap, public sector pay rose by just 4.4% between 2010 and 2016, whereas the cost of living has risen by 22%. The ‘Pay Up Now’ campaign seeks to challenge the Government’s 1% cap on public sector wages.

“We need to do more to support our public sector workers -; and this is why I have signed Unison’s ‘Pay Up Now’ pledge at the Labour Conference. Public sector pay has been cut in real terms because it has not kept up with inflation, with some workers experiencing a 15% cut since 2010. This is not acceptable, and I look forward to working more closely with Unison members in Reading to help challenge the cap on public sector workers pay in my constituency.”