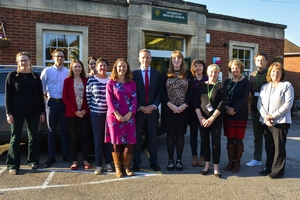 The School is located on Hemdean Road in the northern part of Matt‘s Reading East constituency and has over 500 pupils on roll. In 2016 it received an ‘outstanding’ Ofsted report. In recent news, the School received much local media publicity earlier this year when the Headteacher Mrs Ruth Perry made an appeal for voluntary financial …donations of £190 per child per year to the School to help plug the funding gaps at the School due to budget cuts and rising staff costs. Mrs Perry said at the time that it was a decision she was not happy in making.

Today, the Shadow Secretary of State for Education Angela Rayner MP had a tour of the School along with Matt, and spoke to staff, pupils and parents about how they feel about the School. They also took time to meet with young pupils in an after-school club and take part in a craft activity.

“I’ve been here today with Matt and we’ve been hearing about how parents across Reading have had to really try and dig deep and bring money and investment into our school system. I don’t think we should be relying on the charity of parents to ensure that every child gets a decent education.”

“Under Labour’s national education service, we will fund our education and make sure that we have qualified teachers in the classroom so that every child can have a decent education and their education will be on the ability to learn, and not the ability of their parents to pay.”

Commenting on the visit by the Shadow Secretary, Matt said:

“I am really pleased that Angela has come to Reading today to see the effect of the deep cuts forced upon us by the Tory Government. At Caversham Primary School each child is getting £450 less spending on their education. That means less time with teachers, less equipment, less time learning new skills. I think that’s wrong and we need a Labour Government to reverse those cuts and give our kids a proper education.”
In light of the recent announcement by the Secretary of State for Education The Right Honourable Justine Greening MP in Parliament, it is still envisaged that Schools such as Caversham Primary will continue to fair poorly in financial terms by the ongoing cuts to their budget.