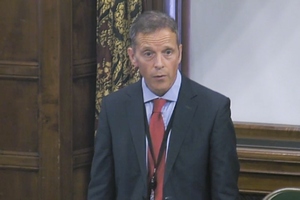 MATT RODDA MP spoke in the Westminster Hall debate on 12 September 2017 which concerned the negotiations on future rights of UK nationals in the EU.

Contributing to the debate, Matt said:

“I represent Reading which is a town with a large EU national population which plays a significant role in our local NHS, in the IT industry which is a core part of the town’s economy, and in many other services. I also should declare a personal interest in that my sister-in-law is German, and is also facing this deep uncertainty at the moment.

I was concerned last week when a document titled ‘Border Immigration Citizenship System After the UK Leaves the EU’ was leaked by the Home Office because I think it gave a very unfortunate window into the Government’s thinking about this important issue. The document proposed to drive down the number of EU migrants by offering them residency for a maximum of only two years; and it suggested that those only who had highly skilled occupations would be considered for permits which would stretch out for a few more years, and despite the repeated warnings from business and public sector of the significant negative impact which this would have, I do think this is of great concern and I do hope that the Government will rethink.

The document also describes a phased introduction of a new immigration system that ends the right to settle in Britain for most European migrants and places tough new restrictions on their rights to bring family into this country. Potentially, this could lead to thousands of families being split up. This is a very serious issue, and such a heavy-handed approach drives a coach and horses through both businesses and families in my constituency and across the UK. Doubtless the ill-will that such an approach would generate would harm our remaining negotiations with the EU.

Having stepped down from threatening the EU with no deal, I would urge the Minister to be more collegiate in his approach. He should denounce this paper and take a more even handed approach – and one that is much more reasonable – and perhaps listen to the Labour approach of offering unilateral guarantees to create a climate of goodwill and positive negotiation with our European partners.”