Potential impact of Brexit on Reading 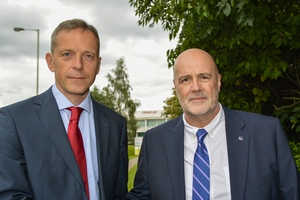 Reading is home to a large number of multinational technology and computing businesses; its location in the middle of the M4/M40/A34 triangle gives it prime positioning for leading technology giants situated outside of London. The Thames Valley region is hailed as the UK’s answer to ‘Silicon Valley’ and makes a £10bn turnover in the technology sector, second only to London. Over 44,000 employees work in the region, and a large number of key players in the technology industry make for a large skilled workforce and a talented pool of subject matter expertise.  The impact of Brexit on this jewel in the Thames Valley crown is of concern, and both Matt Rodda and John Howarth will be raising the interests of businesses and workers, to protect the local economy.

During a recent visit to Reading, Jeremy Corbyn said on Brexit:

“We want tariff-free trade access to the European Market for the manufacturing industry, and for services.  Reading and the whole Thames Valley relies very heavily on hi-tech manufacturing, relies very heavily on advanced computer technology and all that goes with that -; and crucially their market is in Europe and crucially, the European markets are here as well as the contacts for Universities. I made it very clear that the baseline of our negotiations  is  that  access  to  the  market,  is  that  continuing  very  close  relationship between Universities in this country and all over Europe – and students being able to use the Erasmus scheme and others in order to take part in their courses at Universities across Europe. I want that relationship to continue – I made that very clear from the very beginning and made that very clear throughout the referendum campaign.”

Keir  Starmer,  Shadow  Secretary  of  State  for  Exiting  the  European  Union  spoke  in Parliament ahead of the second Reading of the European Union (Withdrawal) Bill.  He said:

“The Secretary of State is keen to portray the Bill as a technical exercise converting EU law into our own law without raising any serious constitutional issues about the role of Parliament. Nothing could be further from the truth. To say that the changes do not matter because we can find the right elsewhere, but then to remove the right to do anything about an effective remedy would mean that the exercise has achieved absolutely nothing.”

“The House of Lords published a further report on the Bill, which reached the following conclusion:

‘The executive powers conferred by the Bill are unprecedented and extraordinary and raise fundamental constitutional questions about the separation of powers between Parliament and Government.’

The report-published  by  the Committee  that  the  Prime Minister prayed in aid yesterday-went on to say:

‘The number, range and overlapping nature of the broad delegated powerswould fundamentally challenge the constitutional balance of  powers  between  Parliament  and  Government  and  would represent  a  significant-and  unacceptable-transfer of  legal competence.’

“Far  from  being  an  endorsement,  that  is  an  explicit  and  damning  criticism  of  the Government’s approach.”

John Howarth MEP for the South East said in relation to Brexit:

“Britain’s membership of the European Union over the past forty years has brought huge benefits to Reading and the Thames Valley’s technology and traditional industries as well as our universities, creative businesses and infrastructure. It is essential that we retain the benefits of both the Single Market and the Customs Union, to protect the local jobs and prosperity.”

“I will be pushing against a hard Brexit; the impact on businesses both large and small in my constituency would be unimaginable.   I am calling for a soft Brexit to protect jobs in Reading and Woodley and Whitegates -; to help to retain the key larger firms, while also standing up for our small-to-medium businesses of which there are a great many in the town.”