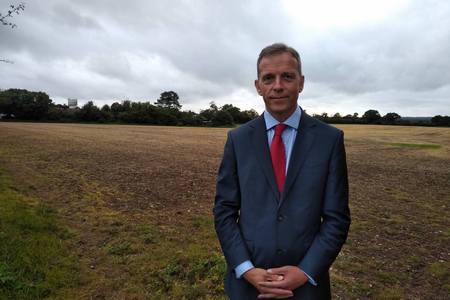 Matt Rodda MP has written to the to Housing and Planning Minister and also Conservative MP for Reading West Alok Sharma on the debacle at Emmer Green where South Oxon CC propose to build over 245 homes on prime greenfield land.

I’m writing to raise an important planning application which has significant implications for two local authorities and for the integrity of their local plans.

I hope that you and the Department will consider the issues below and that you will use your powers to call in this application to safeguard these plans and the interests of local residents.

The application is now due to be discussed at a planning committee meeting tomorrow evening (Wednesday September 6th) and I would be grateful if you would be able to treat this matter as urgent.

I would like to apologise for the lack of notice and I would add that residents were hoping the application might have been discussed later this autumn.

I am working with a number of our other colleagues who may also write to the Department, these include our colleague the MP for Henley, Reading Borough Council and local residents.

As you may be aware, Gladman Estates has applied for planning permission to build 245 homes on a greenfield site on the boundary of Reading. The site is in a rural location and would be the first development on green land in South Oxfordshire, just to the northern boundary of Reading.

As you will no doubt be aware, the Gladman application conflicts with a series of policies pursued by both Reading, South Oxfordshire and Oxfordshire over many years. These policies have been set out in local plans and in the County Structure Plan.

The application runs contrary to the draft Reading local plan, which identifies sufficient brownfield land to provide projected housing demand within Reading until 2036.

There is a significant risk that if the application is approved it could seriously undermine the plan, both on its own and by setting a precedent for other applications.

This is because redeveloping brownfield is more expensive for developers, although it is more sustainable for communities, transport and the environment.

As a result, there is a significant risk that the future development of Reading could be altered for good, leading to more suburban sprawl and stopping urban regeneration in its tracks. This could damage the redevelopment of the town, harming residents, public services and businesses.

Such a move would run contrary to the progress in urban regeneration made during the last 20 years, such as the development of the Oracle shopping centre, the rebuilding of Reading station and nearby office and housing regeneration.

While impressive, these regeneration projects have used only part of the available brownfield in the town and there are a number of nearby sites which would benefit from further redevelopment.

Around half the available brownfield land in the authority lies in the town centre, which is why developing it is so important to the future of the town as a key commercial centre in the Thames Valley.

I also have significant concerns about the application’s potential impact on local transport as the application runs completely contrary to the interests of drivers and other road users.

As I’m sure you’ll agree Reading suffers from severe traffic problems and greenfield development on this site could add significant extra numbers of vehicles onto Reading roads and increase traffic from the north of the town across Reading’s two very congested bridges.

The site would require additional buses on an already busy bus route and the site is accessed by narrow roads which seem unsuitable for cyclists given the significant and fast motor traffic in the area.

In contrast, town centre regeneration helps to manage and reduce the pressure on transport by encouraging walking, cycling and the use of public transport as well as reducing road traffic.

You’ll be aware that Reading is experiencing significant growth in the population of children and young people, with the borough council and the Government’s Education Funding Agency carrying out a school building and expansion programme.

There is severe pressure on places in north Reading primary schools, which would be the nearest schools to the development. This is despite extra bulge classes being provided in a number of local primaries.

A development of 450 family homes could lead to a significant number of school age children moving to the area, without the school places they would need.

There is currently no local plan in South Oxfordshire, however previous plans have included policies opposing housing on green land and outside the envelope of existing settlements.

Yet it is clear that the application could set a dangerous precedent for large areas of green land along the northern boundary of Reading.

If it was passed, the application risks setting a precedent for eroding the gap between Reading and South Oxfordshire villages and hamlets such as Sonning Common, Tokers Green, Chalkhouse Green, Kidmore End and Dunsden.

The boundary runs for several miles and there is a large area of land adjacent to the boundary but outside the Chilterns ANOB.

There are a number of other issues which you may wish to consider, such as the potential effect on the ANOB and wildlife and the impact on views of the Chilterns.

I also understand there are concerns that significant extra water supply infrastructure could be needed due to the position of the development on the edge of Reading and in an area which has at times suffered from a lack of water pressure.

There is also a history of chalk mining and quarrying in the area, some properties near the site have suffered from subsidence and this issue may also need to be taken into account.

I hope you will consider these points and I look forward to working with the Department on this matter. Please do contact my office if you would like to discuss this further.