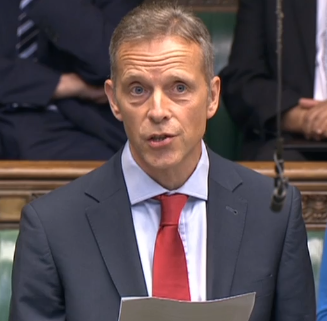 READING EAST MP, Matt Rodda has used his maiden speech to highlight residents’ concerns about the cuts to health and education, the risk of hard Brexit and the need for more affordable housing.

He also pointed out that campaigning against austerity can lead to real change and he celebrated the success of the campaign to save Chiltern Edge School.

As is traditional for a new MP, Matt paid tribute to his predecessor, former Minister for Civil Society, Rob Wilson, thanking him for his public service to the town for the past 12 years. He also commented on the previous Labour MPs who have represented the town in the past, including Martin Salter, Jane Griffiths and Ian Mikardo and he paid his respects to the first Labour MP for Reading, Somerville Hastings who was elected in 1923, whose ideas of the state funding of healthcare were an early forerunner of the NHS.

Matt described the history of Reading, particularly referring to the economic heritage of bulbs, biscuits and beer, and the change to what it is today, of an area where several international IT and telecommunications businesses have situated their offices close to the town. Matt commented that the businesses make a contribution not only to the local economy, but also nationally.

“Several issues loom large for our community; first and foremost the need for properly funded public services; also the desire to avoid a hard Brexit and, indeed, as members have mentioned earlier the importance for affordable and safe housing.

On public services local people rely on and indeed expect high quality provision, and the General Election was a resounding vote against austerity and for properly funded services which was felt and heard very loudly in our part of the world.

I want to remind the Government that parents were angered by the wave of school cuts and they remain in my area deeply concerned despite the window dressing offered by Ministers last week. Meanwhile, many other residents are fearful about the state of our local NHS and they certainly, Madam Deputy Speaker, have no time for the dementia tax.”

Referring to the potential impact of a hard Brexit on the town, Matt commented:

“On Europe our town is proudly international in outlook, with significant numbers of residents from the EU and indeed from the Commonwealth. Reading voted overwhelmingly to remain in the European Union, and many local people oppose a hard Brexit; I should say this includes many who voted to leave. Our residents are not impressed by the Government’s cavalier approach to the negotiations with the EU, and they expect something much better, which I hope we will soon see.”

“House prices are also high and not all work in our area is well-paid; many people in fact exist on very modest earnings. Reading, rather like London, regrettably suffers from some considerable income inequality which leads to even greater issues with housing affordability. In recent times George Osborne effectively stopped Reading’s Labour Council from building 1,000 new council houses -; and that’s despite a significant need in the area. Whilst I wish to work with my colleague who is the Reading West MP and the Housing Minister, I will be holding him to account on matters relating to housing, and in particular the local situation in the Thames Valley.”

Education was also remarked upon by Matt in his address to the House and the impact this has had in Reading. On the recent events surrounding Chiltern Edge School, Matt said:

“I have been campaigning to save a much-loved local secondary school which was threatened with closure. Chiltern Edge School is in Oxfordshire, but like many urban areas, pupils cross our boundaries to a very great extent – and I was shocked to find out that Oxfordshire County Council were planning to shut the school earlier this year which would affect 400 Reading children. I have always believed that their proposal was both irresponsible and misguided, and I cannot really understand why any local authority in an area like the South of England which has rising school rolls would want to consider a school closure at this time. The only plausible explanation was that selling off the land was a way of dealing with short term financial pressures caused by austerity which were affecting the Council. However, after a great deal of work by campaigners and supported by myself and an MP opposite, the MP for Henley, we have been successful and Oxfordshire County Council has now decided to shelve these plans, and I am very grateful for that decision. I would like to support colleagues who signed my EDM opposing the closure and who supported the Save Our Edge campaign.”

Matt concluded his maiden speech to Parliament by saying that he looked forward to raising other matters of importance when the House returns in September.

A full clip of Matt’s maiden speech to the House on the afternoon of 20 July 2017 is available to view here: