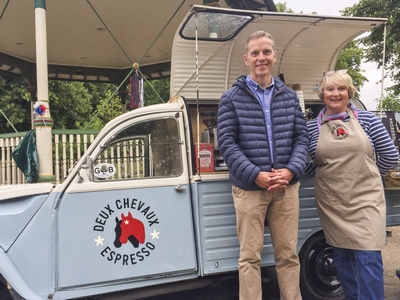 MATT RODDA JOINS IN THE BASTILLE DAY CELEBRATIONS IN READING

The event was initiated by a group of Frenchmen living in the town to help the the two countries learn more about one another, involving as many people from different backgrounds as possible. The French, however, tend not to use the term ‘Bastille Day’ in their celebrations and most often opt to use the phrase “La Fête Nationale” to mark the national day.

There were many continental touches which brought a flavour of France to the town, including a Pétanque Tournament on the gravel at Forbury Hill, a storytelling circle and many arts and crafts stalls. A large variety of food outlets were also available to appease every palate from cakes, crepes, and pastries through to a variety of French fine wines, Parisian meats and even ‘cuisses de grenouille’ -; or more commonly known as frogs legs!

“I was delighted to attend and to support the event which brings people together from across Reading and beyond, from Reading’s French community and many other groups, and I’d like to pay tribute to the organisers and all who took part.”

Also attending on the day with Matt was Lead Member for Culture, Sport and Consumer Services, Councillor Sarah Hacker.

The celebrations took place over the weekend of 15 and 16 July 2017. Bastille Day itself was officially on 14 July 2017 in France, and which marked the 228th anniversary of the storming of the Bastille Prison during the French Revolution on 14 July 1789.