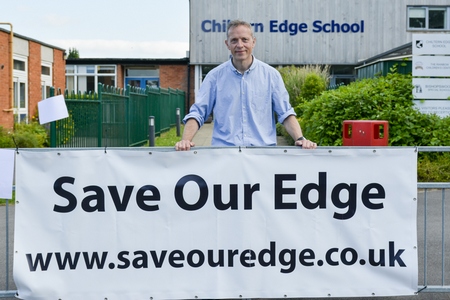 Supportive comments from Oxfordshire’s Head of Education have been welcomed by Reading East MP Matt Rodda.

“I’m pleased with the comments from Hilary Hibbert-Biles; this is good news for parents and students. I hope Oxfordshire’s Cabinet will support this and that it will go further and decide to completely remove the threat of closure from Chiltern Edge at the meeting next week.

“I am looking forward to working together with Oxfordshire and Reading Borough Council and my colleague John Howell, the MP for Henley, to support the school and to help it improve in future. Chiltern Edge is a much loved school with a strong reputation for special needs and it has a new head, Moira Green, who has a strong track record of improving schools.”

The review procedure for Chiltern Edge was given coverage on the Andrew Peach breakfast show on BBC Radio Berkshire on Tuesday 11 July.  A local parent David Bullivant commented:

“There’s obviously been quite a strong opposition to closure and a lot of people have been working hard to try and keep the school open. It’s absolutely the right decision and we are all going to get behind the school and not just make it a good school again, but make it better than it has ever been before.”

“This is a great step forward for the school. I think the important thing to focus on is the future. We need to put an end to the speculation about the school possibly closing. I think the really important thing is for Reading to work with Oxfordshire, and for both MPs to continue to work together on this matter. The school has a strong brand, a good reputation, and a very strong Headteacher in Moira Green who has a track record of turning schools around. There’s a great sense of respect in what the school has done, particularly in the special needs aspect, and a lot of parents think that the Ofsted report has been somewhat unfair. I’m looking forward to a good partnership between Oxfordshire and Reading, and I just want the school to succeed; that’s the most important thing.”

In summary, Matt made a sincere request to Oxfordshire County Council. He said:

“I would again call upon the Cabinet of Oxfordshire County Council at its meeting next week to permit the new Headteacher at Chiltern Edge, Moira Green, the time period she seeks in which to make the improvements needed and sought by Ofsted, and remove the threat of closure forthwith.”

Oxfordshire County Council are set to hold a Cabinet Meeting on 18 July 2017, after which a further inspection of the School is scheduled to take place in October 2017 with a final report on the future of the School being issued in November 2017.